We found this success story on www.saving-sight.org describing an account of cornea transplant success abroad

Fish Have Someone to Fear After Recipient Regains His Sight

Chris was able to return to fishing after his cornea transplant. Tying a fly for fly fishing can be difficult for someone even with 20/20 vision. But for an individual suffering from a blinding eye condition, the challenge can be downright impossible, stealing away the joy of a sport he once loved. 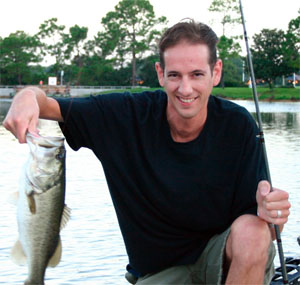 For years, Chris of Kansas City had been suffering from eye problems that left his vision compromised. “Everything was a big haze,” he remarked. “I would see ghost images, like four or five visions of the same chair. There were a lot of halos, a lot of flares, rings around taillights. The haze filled up my whole vision, making it hard to do anything.”

In his early 20s, Chris was diagnosed with keratoconus, a disorder that causes the cornea to become distorted. Chris was fitted with hard contacts to correct his eyesight, but as he grew older, the contacts became more cumbersome while his vision continued to deteriorate. Keratoconus affected his job in I.T., limited his ability to drive, and worst of all, affected his passion for fly fishing.

The Escape From Blindness

Finally, in 2004, Chris underwent a cornea transplant on his left eye under the care of Dr. Joseph Tauber of Tauber Eye Center. Although the first three weeks of his recovery were highly uncomfortable, Chris now has 20/20 vision when he wears a soft contact.

Said Chris, “Everyone wonders – how do you do that? You actually got your eyeball cut open? I think one of the reasons people don’t get the cornea transplants they need is because it’s a scary thought, but it’s so worth it in the long run. There’s nothing I wouldn’t have done to get my vision back.”

The first cornea transplant went so well that Chris underwent his second in 2009. “Although my vision’s not back 100%, it’s amazing I have 20/40 vision even without my contact on. I’m not there yet, but I’m better than I was.”

While Chris has been blessed with better eyesight, the journey has been bittersweet. Because of his condition, Chris’ donors had to be younger than the recipient and the corneas less than 72 hours old. “It’s such a double-edged sword. What’s good for somebody like me meant something bad had to happen to someone else. The hardest thing is knowing what another family was going through.”

Today, thanks to the gift of his donor families, the talent of Dr. Tauber, and the support of Chris’ optometrist, Dr. Jill Smith of Precision Optics, Chris is back on the water and enjoying his favorite sport. Only now it’s the fishes’ turn to be concerned about Chris’ vision.